No Place to Hide... Pressure Builds on Stage 2

No Place to Hide... Pressure Builds on Stage 2

The recurrence of a stomach bug, vomiting overnight and during stage two has severely damaged Samara Sheppard’s chances of defending her Cape to Cape title. The two time champ is in third place in the general classification after struggling to complete the course and there are considerable doubts over her ability to continue racing the event. 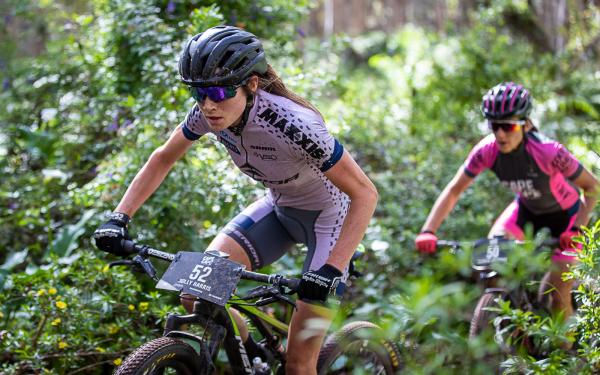 A stunning performance from rising star Holly Harris has seen the young Armidale rider rocket into the lead in the women’s general classification, picking up the stage win and the ‘pink’ leader’s jersey.

“Yesterday I really struggled in the cold, so I was shivering the whole race and just survived. Today I really rode into it and my legs felt awesome, I got my nutrition right and last night the TLR guys made some wicked sticky date pudding and I think that might have helped me a little. I definitely love the sun and the single trail suits my riding style. I like to let it go a little bit and I couldn’t have written the stage better actually.”

“I am stoked to take the win today and to get myself into “pink”. Yesterday was my first podium at Cape to Cape which was so awesome and today tops that. This is one of the biggest races in Australia and anyone who is anyone races it. I was upset to hear that Samara was having a horrible day. She is such a strong rider and it is sad when somebody else can’t do what they want to do. We all know that sucks and how much work goes into training,” Holly said. 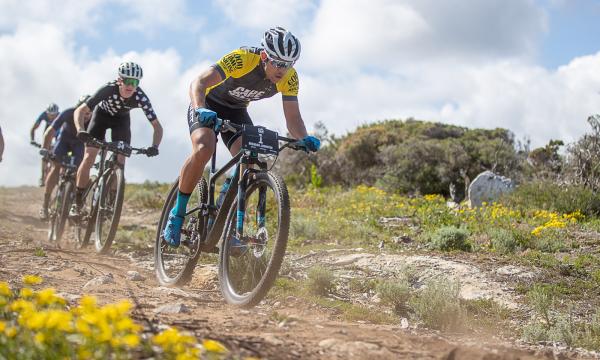 In the men’s race it was Jayden Ward, the younger brother of Kyle, who took the honours recording his first Cape to Cape stage win in a sprint finish, with Cameron Ivory second and Brendan Johnston third.

“I knew from last year that the first rider into the grass descent was going to be the winner. Kyle was nice enough to get to that top corner with a 100m to go and said, “It is all yours brother.’ So, I am pretty stoked with that because it has been an up and down year. This is a real highlight. To be able to race with your brother, elbow to elbow it is pretty awesome.”

Johnston was hoping for the opportunity to steal some valuable time during the Boranup Forest stage, but it wasn’t to be, and he now faces close scrutiny from multiple riders over coming days.

“It was quick today, really quick and there was a chance in the last 15km to get some time like I did last year. I tried a similar tactic and Kyle (Ward) and I opened it up a little bit but it just wasn’t enough. There was still six in the group who got back onto us, so that was unfortunate.”

“We just rolled in as a group and I knew that I had to finish in front of Reece Tucknott to keep the jersey. It was a day of fighting off attacks and with a lot of guys close to me on time, I rode pretty defensively. They were all trying to put it to me but I managed to hold on, so I am pretty pleased.” he said.

One of Johnston’s biggest threats is Cameron Ivory, who has started to find form with a second place in today’s stage and possesses a skill set better suited to the trails in the second half of the event.

“There was quite as much climbing, so my legs decided to turn up today. It was hard and fast from the start and we had a fairly decent size bunch that stuck together, with lot of attacks coming. Coming into the finish I just backed myself a bit in the sprint finish. I was on Jayden’s wheel coming out of one of the final corners in the paddock and when I went for the sprint I pull a foot out of the pedal which wasn’t ideal. By the time I got clipped back in I knew I couldn’t get Jayden because he is pretty strong. I am happy with second in that stage and getting a bit of time back on the GC,” he said. 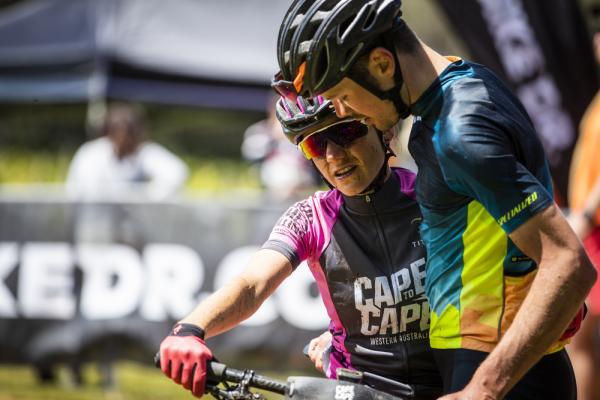 Samara Sheppard loves the Cape to Cape event and is determined to race on if her body will allow but she faces an uphill battle overnight to be anywhere near race fit.

“Monday afternoon I came down with a bug and was seriously unwell and almost didn’t make the plane here. But this is one of my favourite events and something I really look forward to, so I just pushed through it and just nursed the body, hoping everything would be alright. I got lucky yesterday when the course was cut short by 10km and I managed to hold it together enough for 90 minutes. I did pay for it last night and I was pretty unwell again. I started today just wanting to be out there. I didn’t know what to expect or how I would feel but about half way around breakfast came back up. It is super unfortunate to have it happen at this kind of event, it is one of my favourites but I was encouraged to carry on riding by my friend Callum who was just cruising around and we just made the best of a bad situation.” I

“If I did the right thing I would probably be home in bed but sometimes you have got to live a little and enjoy life. “We will have to see what happens but even if I can just ride the stages I will be happy with that. I haven’t seen the scenery around here and just to be a part of the event is really special,” she said.