The horsepower will be down, the acceleration and the terminal speed considerably slower but that wont stop Perth motorcycling superstar Bryan Staring enjoying every bit of the two wheel action at this year’s Cape to Cape four day MTB stage race (18-21 October).

The former Moto GP and Superbike champ has gone back to his pedal powered roots for four days of good mates, fun trails and cold beers at Cape to Cape in the stunning South West of Western Australia.

Bryan’s passion has always been on two wheels and growing up in Perth’s northern suburbs he was continually honing his skills on his BMX and motocross bikes before his exceptional talent, dedication and determination saw him rise to the illustrious, high pressure and cut throat world of Moto GP.

“As a kid it was only bikes, no football, no soccer, no cricket. I got chosen last in all the team sports at school but I was a particularly good junior motocross rider, winning state championships and getting podium positions in national championships and I was also always on BMX bikes. My first serious bike was a Torquer Qualifier and a few Haros but living in the northern suburbs in Perth I didn’t have a bike for too long, they always got pinched,” he laughed. “It was every day after school, every weekend and if it wasn’t the serious component Motocross bikes, it was riding a BMX bike until it was pitch black and we were called home.”

Bryan has recently returned home to Perth after eleven years away racing in a variety of international categories but he is happy with the change of pace and the opportunity to keep his hand in racing Superbikes, road cycling and hitting the dirt on his Motocross and mountain bikes.

“In 2010 I was the Australian Superbike Champion and I packed my bags and went overseas and I raced in the European Super Stock Championship which is like the development series for World Superbikes. I got up to speed in the first year and in the last race of the second year in 2012 I was a very good chance of winning the championship. I had won a lot of races and as a result I got plucked out of there and straight into Moto GP.”

“It is all run and done now but Moto GP was probably the worst thing that happened to my career. I raced in the premiere category for one year in 2013 is what gives me most credit in some people’s eyes and that year is what they want to know about. But when I raced the Grand Prix bike I never had the equipment really to get the job done and from that moment on I struggled and could never redeem myself or get myself in a position with good enough equipment to make an impact again.”

“Then I moved to World Superbike in 2014 and then back to Superstock where I started. In the end I broke my leg quite severely and that was it for me and recently packed it up and came home. That was more or less my international career,” he said.

Bryan said many of his skills are transferable to MTB racing, especially from the years riding BMX and particularly Motocross. 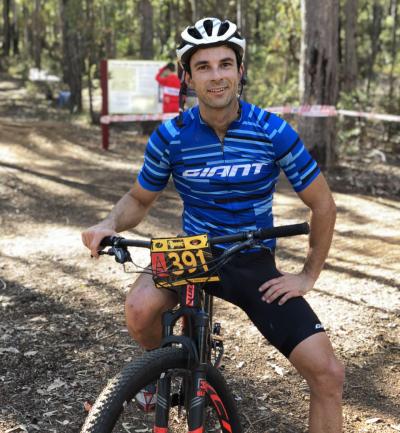 “I am fortunate to have that up my sleeve. I wouldn’t say I am technically the best rider on a MTB but I can certainly manage. I haven’t done that much MTB racing but I have done a lot of road cycling and racing which started off as cross training for the motor cycling. In the end I enjoyed it so much that my aspirations to race outweighed the benefits of just cross training. I became addicted in the end.”

Since his return to Australia Bryan has been displaying his enormous two wheel talent in a number of different events.

“I have won the Leederville Crit which is arguably the biggest criterium in Perth and the Kalamunda 50 50, a MTB one days race in the hills out the back of Perth, in the Open Male category, I also finished second in the 30-39 age bracket of the Australian Veterans Motocross Championship and I have won a race in a round of the Australian Superbikes. I enjoy all the disciplines of cycling and of motor cycling. There is probably one other guy in Australia, Troy Herfoss who is capable of doing all that or more but there wouldn’t be too many others.”

“MTB has taken over a fairly sizeable chunk of my life and I am really loving it. I was lucky at the start of this year the local GIANT dealership asked me if I wanted some help with bikes. I did and they have been fantastic and it has been the best ever deal for me really. Certainly outside of motor cycling. I have a fantastic hook up and the product is really good and now I have opportunities like Cape to Cape.”

“I have never done Cape to Cape before. After winning in Kalamunda my local guy, Michael Johnson at Ocean Keys Cycles asked me if I wanted to race Cape to Cape. I said, ”Okay, maybe,” and he organized a bike for me and that was about the extent of the conversation.”

“I have heard a lot about Cape to Cape and the event has been one that I have wanted to do for a long time and I have been really interested in it. I have never done a multi day stage race before, especially on a MTB which make it particularly different. I really don’t know what to expect or what I am in for or as far as a result will go either.”

“I like to do my best all the time, so I hope my preparation is okay but I am going in a bit blind. If I can hold on to Brendan Johnston and Jonny Odams for 30 minutes I will be a happy camper,” he said.